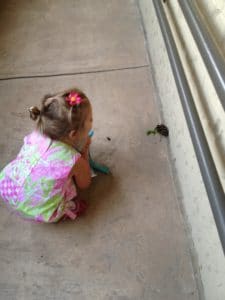 I love this photo.

What I miss most in starting my own business that centers mainly on working with adults is not being with children. Not being with them everyday leaves a significant void in my life in the arena of curiosity, imagination, noticing and reminders of exactly how to live life. They excel at living fully…expansively… with spontaneity, abandonment, and complete immersion.

For so many years they filled my Mondays through Fridays with the same delight of taking in their spirit that they had in taking in the whole world around them.

Children allow a minute to feel like an hour, or turn into an hour, rather than racing through it. Even when they are racing they are still in the total joy of wherever they find themselves. The moment and what is in front of them is all that matters.

On what I think of as “the morning of the gecko” there were two things of which I was keenly reminded.

The first was that children do not miss a thing. It is as if they are at the helm of their own ship, eyes and ears scanning for everything new and interesting. They watch and observe with laser vision, far more than adults often assume. They are also masters of noticing when the least thing in their surroundings is different.

The gecko was on the walkway directly after the children took the sharp corner on a ramp. It would have been easy to miss.

Secondly, this was the place on a ramp where most kids picked up speed, all eyes on the door at the bottom, a race to classrooms.

But when they spotted the gecko they stopped in their tracks…stopped…or got their legs to stop a little after their eyes noticed… and turned back, not about to miss it.

I said nothing. I simply stood and listened with such delight as they talked with each other and got down for a close look, brimming with curiosity. How did it get there? Why was it there? Where was it going? Where were its parents? What did it like to eat? Would it eat the pinecone? Should they get something to feed it? How could they get it to safety so it would not get stepped on? How did it turn that bright green? Were there any others around? Would someone make sure it was safe? When in curiosity, questions flow.

With two or three children at a time, the more questions, the more the curiosity grew as they played off of each other.

And when just one child, simply being in the quiet of the moment of curiosity that brought her to crouch down was enough… no words needed.

Children stop, even when they are running pell-mell. Their antennae are always up and they can stop to explore and be curious as fast as a cat can wake up from sleeping or go to sleep from wakefulness.

They choose to take the time… and they give themselves over to whatever brought them to a halt. How many times, when with a child, do we hear them say, “Just a minute…” as they tug at our hand?

During this season of extra rushing around, may we keep our adult eyes pealed for whatever variations of “geckos” show up in our path and take the time to stop and be curious… and perhaps take the hand of another and say, “Just a minute…” and get that person to stop, too. Our days can be refreshed and perhaps reimagined as if through the eyes and curiosity of a child.

And how might our lives be touched if we stop and become curious about one another with the same captivation?

We all are children, you know, no matter what our age. Indulge in curiosity with joyful abandonment and let the questions flow. We don’t always need to know the answers.